It is with great sadness that I have to announce the death this morning of our Society President. Mrs Gill Shaw, aged 84 years.

Gill is very well known to many of our Society members who have fond memories of her and her late husband Ken, showing their highly successful ‘Vizor’ donkeys at every show they could get to from their home near Kings Lynn. Gill caught polio as a child and as result was paralysed below the chest and confined to a wheelchair This didn’t stop her! Gill was often seen in her electric chair, leading one of her donkeys in the Condition & Turnout class and more often than not winning it, perhaps with other Vizor donkeys coming in 2nd or 3rd spot. You knew you had reached an exceptional standard if you ever managed to beat one of them!

Gill was a generous and kind lady who never failed to encourage others. As the long term effects of polio took their toll and she also lost Ken (and her means of getting out and about), she took on other roles and for many years calculated the showing points for the Society. She never failed to delight in donkeys and all of her friends in the DBS and welcomed a good old chat about anything donkey related. She had the honour of receiving the first Roll of Honour presented by the Society and was over the moon to be made President in 2017. It was well-deserved. 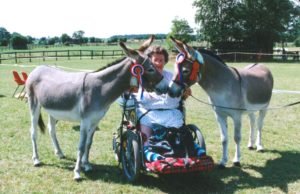 Gill’s health had deteriorated and she died peacefully in her local hospice this morning. Her funeral is Tuesday June 2nd  at 16:45pm, for family members only due to the current pandemic. I will pass on details for charitable donations once we hear.

Gills’ love of animals remained her passion to the end.

She will be very fondly remembered and sadly missed by many. She was a true inspiration to all who knew her.