Donkeys are mentioned many times in the Bible. They are portrayed as work animals, used for agricultural purposes, transport and as beasts of burden. In Jerusalem, to be astride a donkey was commonplace.  Donkeys typically served as everyday transport – a long-eared sight to be seen daily in the streets.   Owners were protected by law from loss caused by the death or injury of a donkey, showing their value at that time.

According to Old Testament prophesy, the Messiah is said to arrive on a donkey: “Behold, your King is coming to you; Lowly and riding on a donkey”. According to the New Testament, this prophecy was fulfilled when Jesus entered Jerusalem riding on the animal. With the rise of Christianity, some believers came to see the cross-shaped marking present on donkeys’ backs and shoulders as a symbol of the animal’s bearing Jesus into Jerusalem on Palm Sunday.

Donkeys hold the distinction in the Bible as being one of the earliest and most frequently mentioned animals.  We find most of the Old Testament’s great historical events include donkeys.

Balaam’s donkey is also one of two animals that the Lord enabled to speak in the Bible.

Today, donkeys are in great demand for nativities and for Palm Sunday parades. 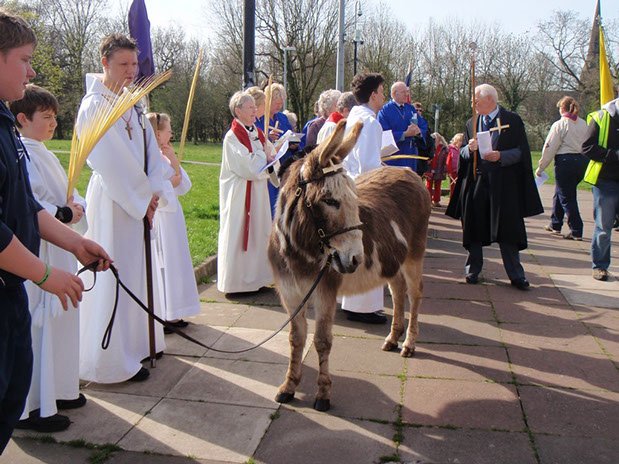